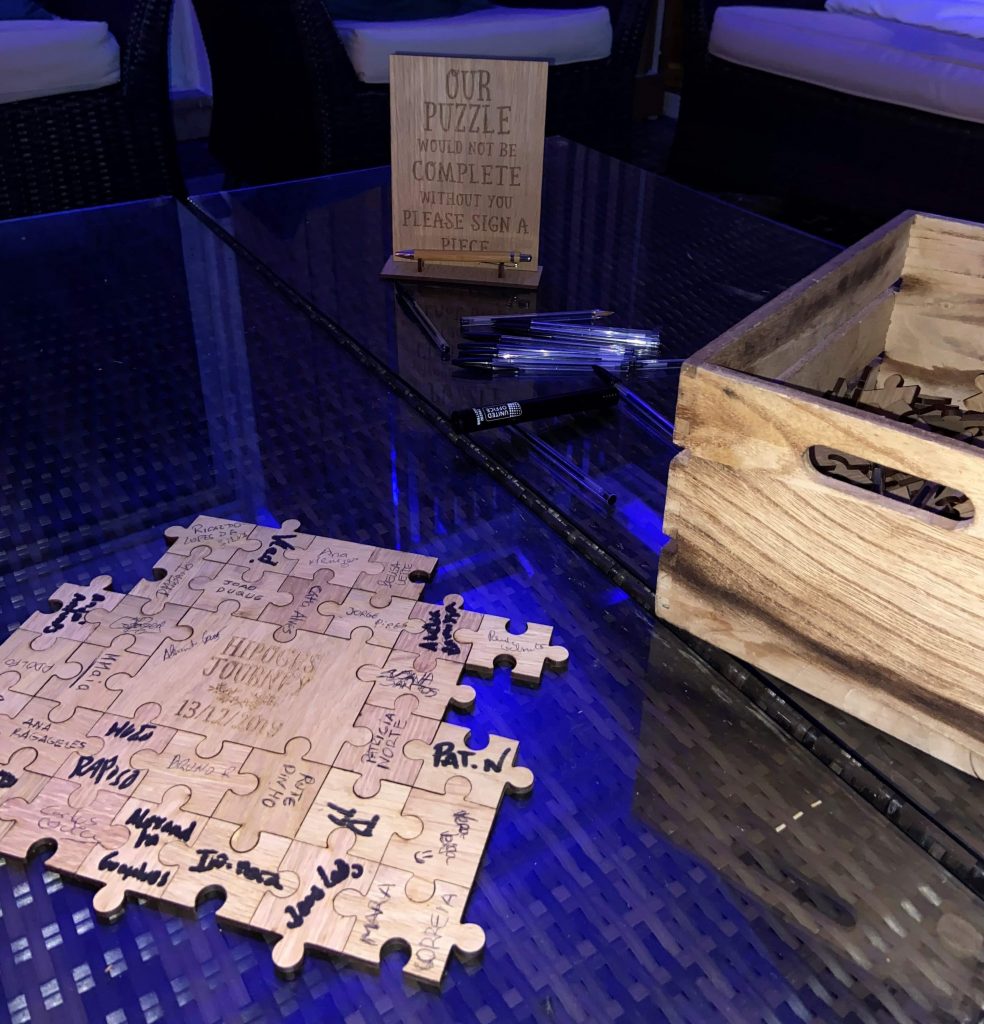 On December 13th and 18th, HipoGes Portugal Christmas Dinners were held in Lisbon and Porto respectively. During this festive season, the company took the opportunity to celebrate the diversity of its team and the expansion of recent years, counting today with two more offices than a year ago, one in Oporto and the other one in Athens.

“HipoGes Journey” was the name given to the event which also reflected an idea of cooperation and inclusion in a multicultural environment. The theme “Around the World” allowed everyone to dress as they wish by representing a country or a culture.

Lisbon’s Christmas dinner took place on December 13th at Casal de Paulos in Monsanto – a pleasant space with a spacious dining room and a leisure area with a bar. The event was attended by over 100 people, 18 of whom were from Madrid’s office, one was from Valencia, one came from Oporto and one from Athens.

The event started at 8pm with a Welcome drink. At the reception it was given randomly to each guest a passport stamped with the name of a country. This stamp marked the beginning of the guest’s journey, which at the event represented the table where he would sit.

At dinner there were 19 round tables, each one with the flag of a different country, which represented the number of nationalities that exist today at HipoGes. The goal was for each one to circulate through the various tables to collect as many stamps as possible while interacting with colleagues who were in the different “countries”.

There was also a wooden puzzle for everyone to complete with their signature on each piece. It meant how each piece of the company (each employee) was important for its success.

Also, the photobooth of snapshots at the event allowed everyone to take home their own souvenir of that night.

After dinner the “HipoGes Iberia Christmas Awards 2019” were presented. This competition consisted on a voting by the team on the employees who best represented the attributes Talent, Solution-oriented, Rigour and Flexibility. Revealing the winners were Margarida Maia, Claudio Panunzio, Hugo Velez and António Nogueira Leite. And the winners were:

– Carlos Côdea in the attribute Talent

– Catarina Monteiro in the solution-oriented attribute

– Dora Salgueiro in the attribute Rigor

– Ana Trindade in the attribute Flexibility

At the end of the night the party took place on the dance floor, in a room that had dj and open bar all night.

The following week on December 18th, the celebrations continued in Oporto, at the restaurant O Torreão. There were more than 70 people at the event, of which 15 were from Lisbon and 6 from Madrid.

The guests also received their passports with the stamp and all the elements that were part of the theme “Around the World” were present.

It was the first HipoGes Christmas dinner celebrated in Oporto and it happened to be very entertaining with great involvement to the theme by the team. The proof is in the snapshots of the photobooth:

As in Lisbon’s Christmas dinner, the awards were also given to employees whose performance best represented the attributes of Talent, Customer Oriented and Rigor. The winners were revealed by Margarida Maia, Paula Santos and Armando Castanheira:

– Tiago Leite was the winner of the Talent attribute

In both events two members of the management (Hugo Velez and Claudio Panunzio in Lisbon; and Hugo Velez and Margarida Maia in Oporto) left a few words of appreciation to congratulate the team on the company’s trajectory and achievements, in a year with the first office opening in Oporto, a new office in the headquarters in Madrid and the entrance into a new country – Greece.

As usual, both in Lisbon and in Oporto, the team showed its good mood and took the opportunity to relax and celebrate another year of many challenges and great achievements.