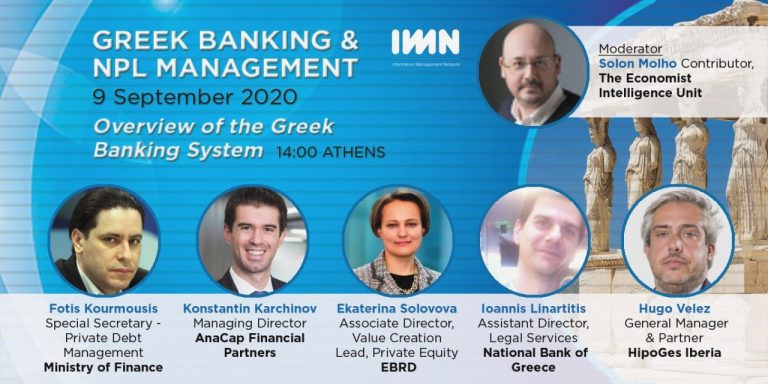 Last Wednesday, September the 9th, HipoGes was present on the Information Management Network’s (IMN) online seminar, titled “Greek Banking System: NPL Management and Restructuring”, through the participation as panelist of our General Manager & Partner Hugo Velez. The seminar could also count on the participation of diverse specialists on the matter.

The event started after an introduction by John Mourmouras, Deputy Governor of the Bank of Greece, who gave an overview on Greece’s economy. In his opening speech for the “Greek Banking System: NPL Management and Restructuring” conference, Governor Mourmouras referred the asymmetric effects that this pandemic has on both South and North European countries, stating that it took a harder hit on the Southern countries as they were still recovering from the past economic recession. The impact of the new coronavirus affected, as referred by the Governor, the Greek NPL stock, which registered a total increase amount of 54.000M€, with a 33% NPL ratio, stressing that projections show a possible NPLs’ value increase of 10.000M€, next year, due to the coronavirus pandemic. Governor Mourmouras did not forget to praise the Greek population, as they easily cooperated with the measures imposed due to Covid-19, earning the place of one of the 5 countries in the European Union with less deaths per million people.

After the introductory note from the Governor of the Bank of Greece, the seminar “Greek Banking System: NPL Management and Restructuring”, which saw the participation of Hugo Velez, started under the theme “Athens Overview of the Greek Banking System”, where many topics where discussed under the moderation of Solon Molho (professional finance freelancer and contributor to The Economist Intelligence Unit in Greece). Within the theme, a discussion about HAPS (Hercules Asset Protection Scheme) stands out, as it was envisaged to provide 9.000M€ in guarantees but has now been increased to 12.000M€. Also standing out is the discussion about the creation and setting up of a Bad Bank, which would see an “implementation of an Asset Management for deployment of extra tools to combat Greek banks’ high stock of NPLs”.

Still within the theme, the panelists were able to explain their views on what to expect in the year to come and the possible ways to restart and restore the Greek economy, specially concentrated on the plans to reopen Greece’s tourism.

The next session of “Greek Banking System: NPL Management and Restructuring” seminar, under the theme “Athens Analyzing the NPL Market and Future Transactions in a post-Covid Era”, had different approaches on various questions about the future of the Greek NPL market post-Covid, what volumes should we expect for the next 12 months and the attracting of future investors. This seminar had Reza Moghadam as a moderator, now Vice Chairman for Sovereigns and Official Institutions of Morgan Stanley and ex-Director of the International Monetary Fund (IMF).

In total, the event had an audience of 323 people signed-up, with more than 120 companies and 20 countries represented, making possible near 200 networking opt-ins.

After the event, we at HipoGes went talking to Christopher Arnold, Vice-President of the Structured Finance Division from IMN to know his overview on the online conference:

“Like so many global conferences scheduled for 2020, IMN’s Annual Investors’ Conference in Greek NPLs, successfully pivoted to the virtual format in an effort to bring the industry together and create a platform to discuss new opportunities and developments in the Greek market.

Key themes discussed included: The Hercules Asset Protection Scheme (HAPS), the proposal and establishment of a Bad Bank, challenges for servicing of these loans, and attracting foreign investors.  With major securitization projects set to resume, this is a critical time for Greece’s funding strategy going forward.

We would like to sincerely thank all our attendees and sponsors for their support in making this event a success, and we look forward to the possibility of hosting the industry in Athens in March 2021 for the IMN 3rd Annual Investors’ Conference on Greek & Cypriot NPLs, widely regarded as the deal-making event for the NPL industry.”

For more information on the event and the possibility to watch the expert speakers on-demand, go to: https://www.imn.org/virtual-events/conference/Greek-Banking-NPL-Management/Agenda.html